INSTRUCTIONS NOT INCLUDED Becomes Highest Grossing Spanish-Language Film Ever Released in the U.S.

SANTA MONICA, Calif.- Pantelion Films' breakout comedy/drama INSTRUCTIONS NOT INCLUDED, starring and directed by Eugenio Derbez, grossed an estimated $3.4 million in its fifth weekend at the domestic box office, bringing its total to an estimated $38.6 million to date as it became the highest-grossing Spanish-language film ever at the domestic box office, it was announced by Lionsgate. Pantelion Films is a joint venture between Lionsgate and Latin media giant Groupo Televisa.

INSTRUCTIONS NOT INCLUDED passed Pan's Labyrinth, which grossed $37.6 million at the domestic box office, to become the new record holder. The Pantelion release also became one of the four highest-grossing foreign-language films ever in the U.S., ranking behind only Crouching Tiger, Hidden Dragon (Taiwan), Life is Beautiful (Italy) and Hero (China). Pantelion noted that INSTRUCTIONS NOT INCLUDED has achieved its entire domestic box office in the U.S. since the film hasn't been released in Canada. "We've been building our brand and our audience for three years, and we're very pleased that our efforts have resulted in a record-breaking hit," said Pantelion Films Chief Executive Officer Paul Presburger.

"The film's success reaffirms our belief that there is a large audience in the U.S. with an appetite for commercial films with Latino characters and themes."

INSTRUCTIONS NOT INCLUDED is the story of Valentin (Eugenio Derbez), Acapulco's resident playboy–until a former fling leaves a baby on his doorstep and takes off without a trace. Valentin leaves Mexico for Los Angeles to find the baby's mother, but only ends up finding a new home for himself and his newfound daughter, Maggie (Loreto Peralta). An unlikely father figure, Valentin raises Maggie for six years, while also establishing himself as one of Hollywood's top stuntmen to pay the bills, with Maggie acting as his on-set coach. As Valentin raises Maggie, she forces him to grow up too. But their unique and offbeat family is threatened when Maggie's birth mom shows up out of the blue, and Valentin realizes he's in danger of losing his daughter- and his best friend. 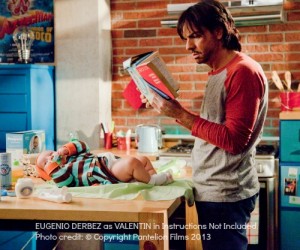