Captain America: Civil War – Are You #TeamCap or #TeamIronMan?

As a mom of two boys, one may think that my excitement for the new Marvel movie CAPTAIN AMERICA CIVIL WAR is because I’m a mom of two boys. That’s only partly the case. In 2008, when my son was just a toddler, I took him (at his nap time) with me to watch Iron Man. I figured that he’d sleep through the whole thing so I could check the new Robert Downey, Jr. movie. Of course, he woke up during the intro scene as AC/DC’s ‘Back in Black’ blasted through the theater. However, to my delight, he sat in my lap and together we both began our infatuation with Marvel movies. My son was mesmerized with super heroes and I with Tony Stark.

Today, I’m still #TeamIronMan. However, both my sons are #TeamCap even though they both protest that they really both love all the Avengers. We are a house divided and we’ve been talking about CAPTAIN AMERICA CIVIL WAR for almost a year now. Who will win? What’s going to happen to The Avengers? And then in March Marvel release that epic trailer with the special guest teaser. We, along with the rest of Marvel fans, went crazy!

SYNOPSIS: Marvel’s CAPTAIN AMERICA CIVIL WAR finds Steve Rogers leading the newly formed team of Avengers in their continued efforts to safeguard humanity. But after another incident involving the Avengers results in collateral damage, political pressure mounts to install a system of accountability, headed by a governing body to oversee and direct the team. The new status quo fractures the Avengers, resulting in two camps-one led by Steve Rogers and his desire for the Avengers to remain free to defend humanity without government interference, and the other following Tony Stark’s surprising decision to support government oversight and accountability. Get ready to pick a side and join the nonstop action playing out on two fronts when Marvel’s CAPTAIN AMERICA CIVIL WAR opens in U.S. theaters on May 6, 2016.

Queridos, it’s almost time to get all the answers to our questions and settle this last question once and for all.

Are you #TeamCap or #TeamIronMan?!

Share your answer below and on social media for a chance to win TWO movie passes to the advance screening of CAPTAIN AMERICA CIVIL WAR on Monday, May 2nd, 7 p.m. at Santikos Palladium 19. The theater for this advanced screening will not be overbooked. Winners must be in line no later than 6:30 p.m. CST.

For each entry, leave a link to your answer in the comment section below to be considered an official entry. Every comment counts for one entry. 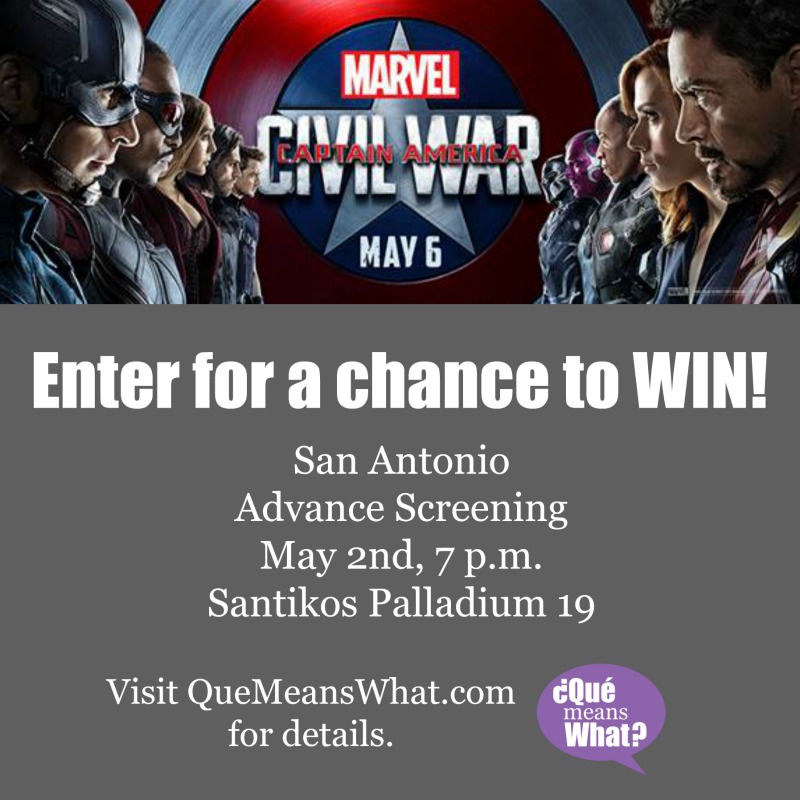 *This contest ENDS 4/29 at 11:59 p.m. CST. Winners will be chosen at random. Winners will be notified via email used to leave a comment or sign up for the newsletter. One winner per email address. Prizes were provided to QueMeansWhat.com. This contest is in no way affiliated with Twitter, Facebook, or Instagram. PLEASE ARRIVE EARLY.